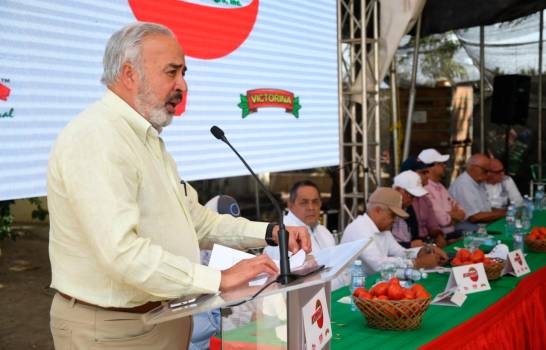 Félix García, President of the Afconagro

“Afconagro, an institution set up by food operators Transagrícola (Linda), Peravia Industrial (La Famosa) and Victorina Agroindustrial, has requested guarantees from our government authorities, in view of the need to ensure an adequate supply to meet the requirements of the Dominican people and of our neighboring countries in terms of tomato paste and other tomato products, particularly with regard to fair quality and prices. We require the firm support of the authorities for our agribusiness and commercial operations,” he said.

“That is why, in Afconagro, we are calling on our government authorities to study and explore alternatives that guarantee the continuity of the agricultural sector, especially by monitoring imports of finished products, as do the governments of other countries with which we have agreements, in consideration of the fact that this sector is a development pillar in our nation,” Garcia said.

On behalf of Afconagro leaders, Félix García thanked the government for declaring 2020 the year of “Consolidation of Food Security“, by means of a decree “which will directly contribute to helping the population and to supporting agricultural production.”

In support of this request, Félix García explained that the 2019-2020 crop of processing tomatoes covers a general area of 80 000 tareas (just over 5 000 hectares) concentrated in the provinces of Azua, Peravia and Pedernales, mainly operated by small producers, with 1 260 hectares located in the northern region and 3 775 hectares in the South. Total investment in agricultural production stands at around 700 million Dominican pesos (just over EUR 12 million or USD 13 million). In the province of Azua, the average annual yield of tomatoes for processing is generally between 35 and 40 Dominican quintals per tarea (about 27 mT/ha), but some years, the average has managed to exceed 60 quintals (43 mT/ha), locally even reaching yields of 75 to 115 quintals per tarea (from 54 to 83 mT/ha). Local professional sources indicate that the average cost of production in 2018 was between 7 580 and 8 000 Dominican pesos per tarea (i.e. EUR 2 080 to 2 190 /ha or USD 2 250 to 2 370 /ha).

According to Mr. Garcia, thousands of growers have registered for the agrarian reform and hundreds of private producers depend on the cultivation of processing tomatoes, in an industrial and commercial sector that provides permanent or seasonal jobs for more than 80 000 people and represents a workload of 560 000 days (7 man-days/tarea (1 tarea = 630 m²)), with a very significant socio-economic impact at the national level.

The bulk of Dominican imports of tomato products involves the supply of pastes, which are mainly of US origin. 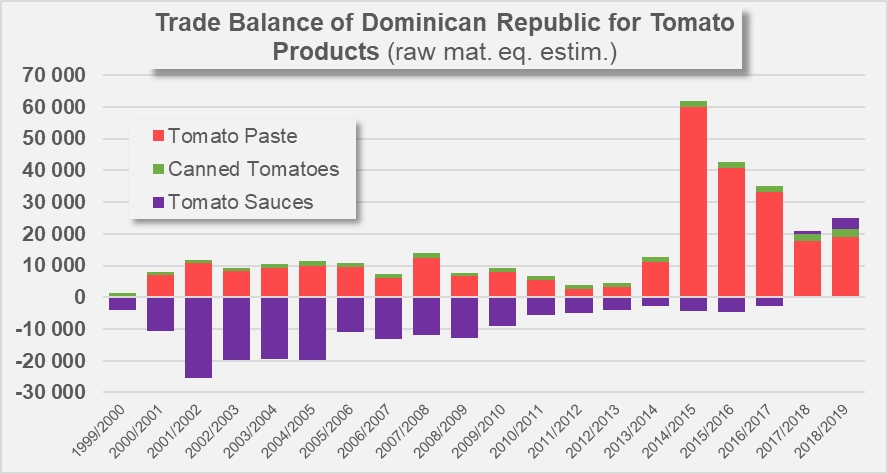 FILLING IN YOUR INFORMATION

FILLING IN YOUR INFORMATION